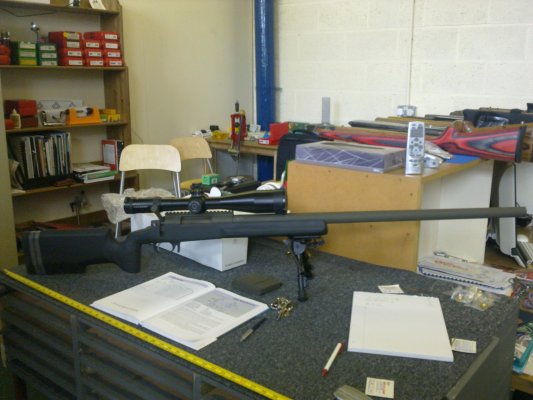 The custom rifle was in its final stages, rings awaiting mounting and ready to go.

I took a 3 hr flight into Manchester airport and headed off to greater Manchester after picking up my rental car. I was very excited to see the new rifle now that it has been put together. Driving through the moors is an experience if like me, you’re not accustomed to the expanses of land that populates this part of the UK. Once I got to the location, we went to pay the smith a visit. He was working on the magazine to make sure it cycles properly. 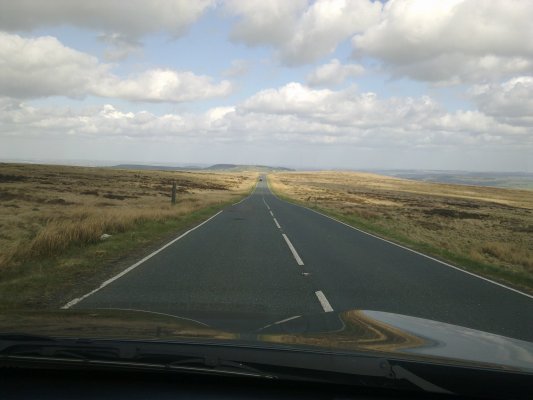 Above: The drive to diggle ranges from somewhere outside bradford, UK

We mounted the scope and set off to the range. Once there we mounted the scope and set a plumb line on the A range at 100yards to check the reticle is indeed 90Degrees to the bore. Meanwhile we cleaned the barrel with boretech eliminator just to make sure it was clean and proceeded to load the ammo on the range. We loaded 10 rounds in 0.5 grain increments to see what velocity we would be getting. We wanted to see if we could get close to the 3000ft/s we had in mind while remaining safe in this rifle and with good accuracy. We weren’t bothered to zero the rifle precisely, we just wanted to boresight it, make sure we are on paper to conduct load development. We would then zero the rifle once we have a proper load. 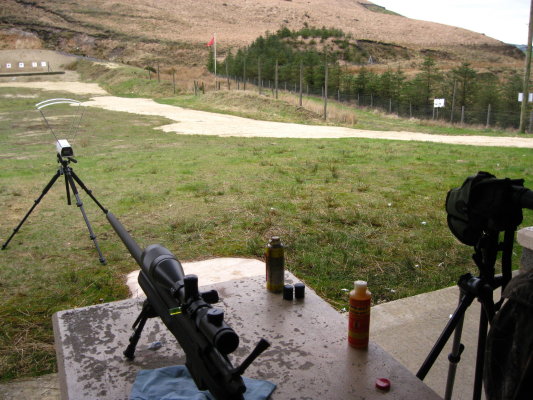 We had everything prepared ahead of this, all brass had been weigh sorted for identical volume capacity. I organise my trips to minor details so when I am on the ranges, I don’t waste time.

Taking Vince’s suggestion, I measured the freebore of the rifle till the berger 155.5 touched the lands. (an article of how to do this will follow shortly) This measured 2.280”. I setup to seat them 0.010 off the lands. I worked up loads in 0.5grn increments seeking to find the pressure limit. Started at 45.5gr of N540 (double-based powder) and loaded 3 rounds, 1 round at 46, another at 46.5 (seen at the top) and 3 at 47gr at the very bottom of the target. The first show went off and it was on paper😊 I like the recoil of it, it felt solid, decisive and due to its weight, it really didn’t move much. I was smiling and curious to see what groups it was gonna yield. The rifle seemed to shoot all of theseloads well and in the same spot at the 100 yard line so I figured the 47grain load should be tested at 600yds. We went ahead and loaded 6 rounds of this specific charge. The chrono was showing an 18ft/s spread, not the most desirable one but nonetheless promising. Back then we didn’t have magneto speed of labradar yet…

The initial 3 shots put a smile on our face as the rifle put together a clover leaf of shots touching each other. We chronoed a few rounds and we were at 2911ft/s, 2920ft/ and 2930ft/s. 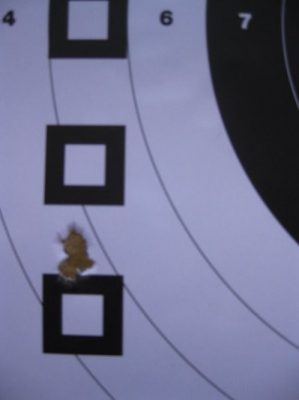 At this point I noticed no signs of pressure. We had run a few tests on quickload to get some predictions and we were happy to see that the velocities predicted earlier matched our real-world live firing at 2911ft/s for 47grains of N540. Below is the quickload screen for this load. *Note it is still at the pressure curve where we have not yet gone into the red. We could go a little higher if we wanted to assuming we work up in smaller increments say 0.2grain. 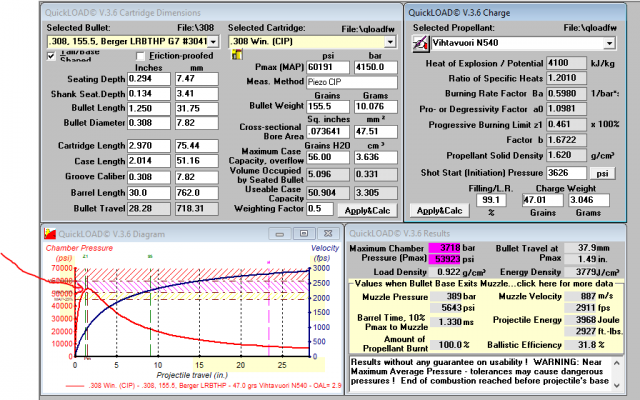 This group at 600 measured 4.8 inches in vertical. I was not happy with this much vertical. We need to remain under 3 inches of vertical just to remain in the X ring at 600 yards as shown below. 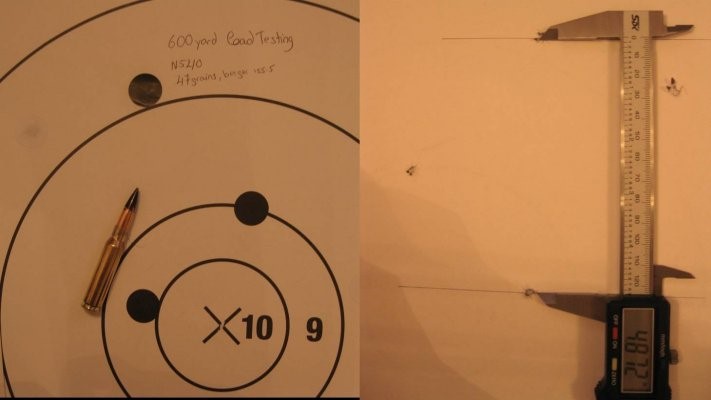 At the same time this gave me some confidence that the pressure data we had estimated earlier for our higher loads should be spot on as well. The closer you get to the higher pressures, the smaller the charge increment should be. In other words if you were testing 0.5 grain increments earlier, when approaching the max pressure you should be increasing charges by 0.2gr while monitoring pressures signs on the primers, ejector marks on the case head and eventually sticky bolts. I had a go with 47.8gr which gave me 2950ft/s. These were tried at 600 right away. Note how the vertical shrinks. Keep in mind your shooting has to be right on the money. If you spoil the shot for some reason take note. 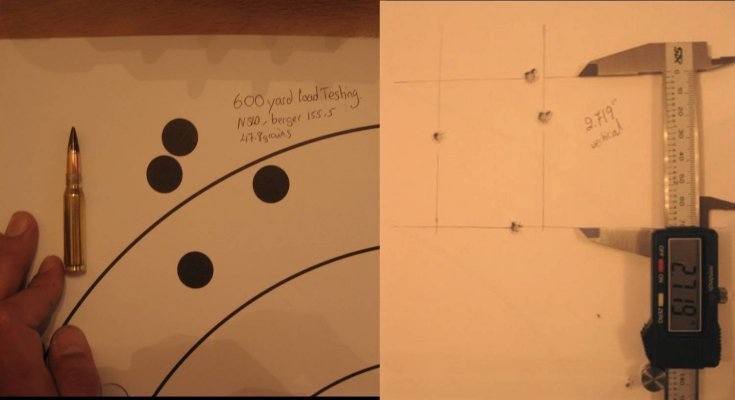 with a tad over 2.7 inches of vertical at 600 yards and a weekend of shooting approaching, I went to work to load up 50 rounds. It takes me about 1 minute per round between dropping powder and seating bullets with a Wilson inline bullet seater.

Below: Diggle ranges – shown below from the butts looking at the clubhouse. This range can be really tricky to shoot in due to its topographic features.

This is the 600yard target. Notice how small the target X ring is. Some of the best guys in this game can put over 70% of their 15 or 20 round strings in the X and 5 ring at this distance.

After that weekend shooting I looked at the plotting sheet to find out that the average over 20 rounds was about 3inches of vertical at 600 or 1/2MOA. Later I played with the seating depth till we were able to reduce the vertical to around 2-2.5 inches with 0.0015 of neck tension.
I would later swap to a Schmidt and bender 5-25×56 scope to see how it worked out with a tactical scope and did shoot a few matches with it as seen in this picture below. It looks the part but it’s not my scope of choice for this discipline.

This Schmidt & bender 5-25×56 is not my favourite scope for Fclass target shooting for the following:
• It’s too heavy for this rig and definitely doesn’t make weight but that’s something we knew already.
• Reticle and turrets were not MOA/MOA. It didn’t matter for shooting paper targets as we knew already how big the target is using our plot sheet so we could read adjustments required off the plotting sheet. I could have drawn up a plot sheet in Mils as some did but i’ve been trained by shooters shooting MOA and consequently I read wind in MOAs so in other words i’m baked!
• The windage knob is stiff. When you dial wind up and down during a match, the rifle moves. It doesn’t matter if you’re engaging fig 11 torso sized targets but for 3inch targets at 600 yards it’s not ideal. The nightforce benchrest scope in comparison was much easier to dial as is the March scope 2.5-25×42 MOA/MOA.
• 0.1mrad is a little too coarse when you’re engaging such a small target. I prefer 1/8 MOA adjustments for Fclass to be able to precisely square the group on the xring.

• The scope can take a beating- that’s a sure plus.  I dropped it once when opening its pelicase the other way round and it landed on the windage turret from 2 feet high with a heavy 6kg barrel and action and it held zero. You have to give credit where it’s due.

Next to us, a member of the club was experimenting with a 223rem with a 90grain Berger VLD built on a savage action. The rifle didn’t even move on firing!

Back to my rifle… the Schmidt Bender was eventually swapped around to a Nightforce NSX 8-32×56 which was also fitted with a Barrett BORS.

Here you can see me testing the Barrett Bors in just about freezing weather and comparing it to my kestrel readings. It took sometime to adjust which meant you would need to leave the barrett bors out in the climate you would expect it to be used if you wanted the firing solution to be accurate.

READ: Building a custom rifle Part 3 – Got the rifle Chassis Bug? I did!

Founder of Rifletalks.com. I setup this website to share some of the knowledge and experiences I have been through over the last years in pursuit of long range rifle shooting accuracy. Feel free to email me. 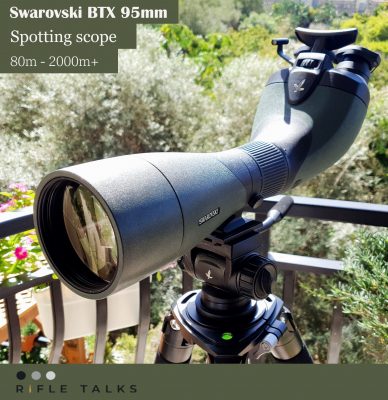 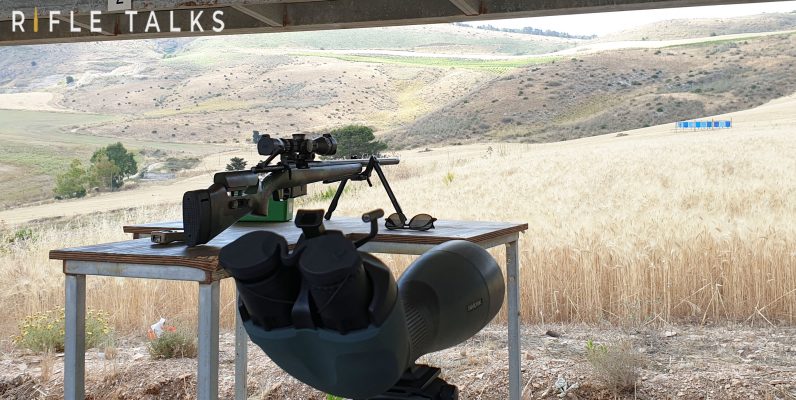 Load development for 308Win in under 50 rounds 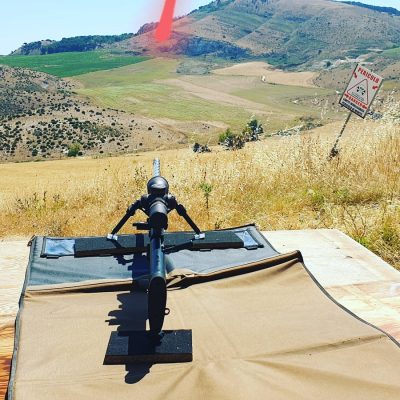 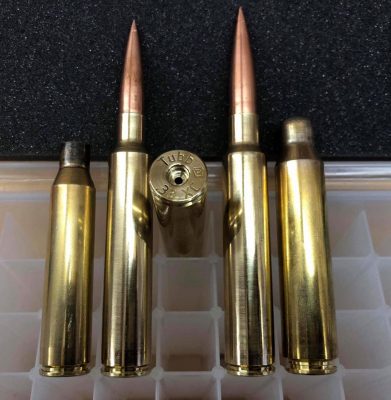 Long range factory hunting rifles – How good are they? 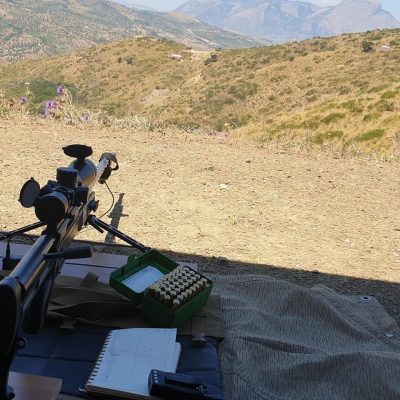 riflescope 101: How to choose a riflescope 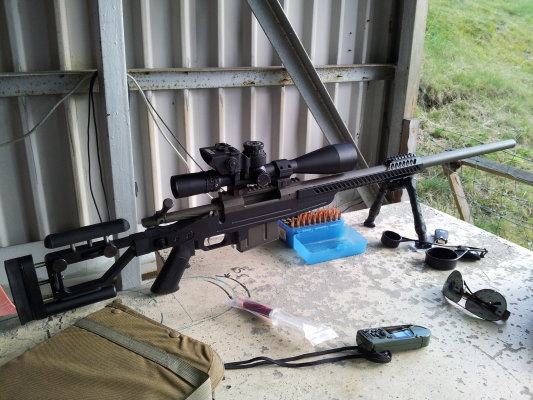 READ: Building a custom rifle Part 3 – Got the rifle Chassis Bug? I did!

My First Precision rifle – follow up to Factory VS Custom

My first precision rifle Part 1 of the journey into building a long range precision [...] 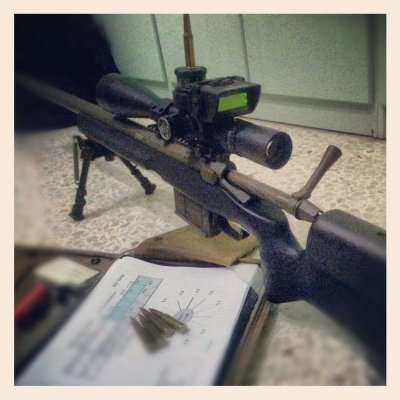 Which rifle is ideal for your needs? One of the most frequently asked questions be [...]

Any cookies that may not be particularly necessary for the website to function and is used specifically to collect user personal data via analytics, ads, other embedded contents are termed as non-necessary cookies. It is mandatory to procure user consent prior to running these cookies on your website.

STAY UPDATED BY SIGNING UP FOR OUR NEWSLETTERSIGN UP
+