Hey welcome to rifletalks, glad you found your way here. I setup rifletalks to share things I learnt in pursuit of my passion for precision rifles and long-range shooting over the past 15 years. Have a great time and shoot with purpose. I hope the info here will serve as motivation to others to get into this fabulous sport.

I was born in Malta, a tiny island in the Mediterranean and also the smallest nation in the European union with a strong British influence having been a British colony till 1979. Most of our forefathers served in the British navy or regiments within the British Army and were familiar with the venerable SMLE .303 cal rifles which they shot in territorials training camps.

Until a few years ago we only had these rifles… till the day when the Maltese firearms lobby together with the authorities drew up the current firearms act after years of working for this. From then on, things changed at a faster pace to a much more prosperous future for sports shooting enthusiasts which enabled law abiding citizens to own and venture out to experience this amazing sport, which brings me here.

This was my first gun, an FAC air rifle of some 50ft-lbs with which I use to shoot to 180 yards to practice with before i migrated to centre fire rifles. That was my initial footing into long range shooting. Once I got into powder burners I never looked back.

My main interest lies in precision rifles, F-class rifles, tactical rifles and ultra long range rifles with some interest in fine hunting rifles. I own custom rifles in all these categories mentioned which I had built over the last years by some of the best British gunsmiths. I’m fanatic about building custom made rifles, choosing components, dealing with the best people out there to get the project done on time and within budget. I’m very pragmatic and no BS attitude when it comes to building one of these precision tools. I enjoy making sure that other shooters get the best rifle for their intended discipline far away from media driven decisions which often result in costly backtracking.

I love high quality optics and have owned a few; mainly Nightforce, Leupolds, Schmidt bender, IOR, March, Swarovski and Zeiss. I believe I am a talented hand loader and trained with some of the best european shooters which taught me to develop some of the most accurate ammunition for competition that can hold under 5 inch vertical at 1000 yards when shot from these amazing engineering masterpieces. I wish to thank Vince Bottomley, Russell Simmonds, Tim Stewart, Assad Wahid, Mik Makismovic, Paul Philips and Ryan Pierce for their assistance along the way. Their combined knowledge is worth a fortune!

We have inherited a 900 yard rifle range on this small island, in the traditional British format with butts and marker infrastructure as you would see at Bisley or Diggle ranges with the backdrop of the Mediterranean Sea, no back stop! Walking there as a kid when the army wasn’t shooting, I was always impressed by the distance and accuracy that could be achieved from these tools. I wanted to compete and own my own custom rifles, the best hand-built precision rifles money can buy. Due to maritime traffic and lack of interest from authorities in actually setting up a proper rifle range with adequate butt stop, this range is not used by civilian shooters and sporadically used by military.

So where do you shoot they ask me?

Instead we travel routinely overseas to practice. My two go to countries are the UK and Italy. I’m there as often as I can make it between work, business and everything else, typically every few weeks. This is where I shoot the most especially the UK. From here I thank the fine guys at the NRA, the UK Police and Malta Police for their support in facilitating matters for shooters.

Pembroke Ranges Malta during a joint exercise with Italian SOF.

Occasionally you can see the Italian special forces train there with our C company special duties. See pics below.* courtesy of @t1_firearms_training

Anyways, fast forward to joining the EU and in my late teens, I got to travel more to pursue my obsessive interest in precision rifles. The internet was a major turning point connecting many people with common interests including the shooting community. As an offspring of the internet generation, forums, blogs and eventually facebook provided the perfect learning and networking link.

During my student years in Switzerland, I had the opportunity to practically fire any rifle I wanted and even joined the Swiss FCSA to try out the 50cals and shoot long range with my friend Thomas Baumgartner, an avid Steyr HS50 shooter. There in 2008, I also met Reid Woodward, US FCSA president. I would put away money from my weekly budget to be able to purchase ammo to train with. I was HOOKED!

Since then I have lived overseas and travelled exclusively to receive training in shooting precision rifles at long range and beyond. I’m a passionate F-Class rifle shooter with a close interest in the PRS and ELR scene. I shot with some of the best Europe has to offer and was lucky and grateful enough to receive tuition from them in handloading precision ammo, wind reading and long-range competition. 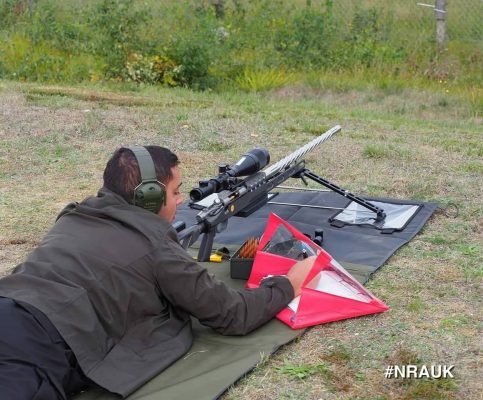 What do you do for a living?

Professionally, I work for an international tech firm managing search marketing campaigns across a number of paid marketing channels for the US, UK, German and Canadian markets. I also jointly run a lettings business. Handling data and statistics is second nature to me. I hope to put forward ballistic representations not shown beforehand in Ballistics by @rifletalks.

I believe that any passion can be the driving force behind an individual’s wish to achieve, surpass and make happen. Rifle shooting has always pushed me to explore new boundaries, meet new people, better myself professionally and financially in order to be able to sustain it and keep ‘em bullets flying😊

So you want to shoot LR in europe?

Precision rifle shooting is like golf but with bullets and equally priced especially in Europe. It involves travelling, long drives and paying over priced US imported components. Hauling a shit load of stuff with you in plane or truck is the order of the day so be ready to spend if you want to squeeze triggers. If you shoot competitively and regularly its comparable to motor sport, racing model planes, 4x4s etc.

In this blog I will share some ways how you can make it work, what to buy, why it has worked for me, who has reliably serviced our needs, facilities that we recommend, what to avoid so as to make each trip count and a memorable one. The rifle shooting community is blessed with some AMAZING individuals that go out of their way completely to assist others. It is also one of those industries in which one can still start out a business small and grow it organically. Shooters are spending more time and money in their pursuit of ultimate precision. Make sure you make the best out of every shot. Have a great time and shoot with purpose. Rifletalks – discussions in pursuit of accuracy, shooting opportunities and long-range rifle activity.

This website uses cookies to improve your experience while you navigate through the website. Out of these cookies, the cookies that are categorized as necessary are stored on your browser as they are essential for the working of basic functionalities of the website. We also use third-party cookies that help us analyze and understand how you use this website. These cookies will be stored in your browser only with your consent. You also have the option to opt-out of these cookies. But opting out of some of these cookies may have an effect on your browsing experience.
Necessary Always Enabled
Necessary cookies are absolutely essential for the website to function properly. This category only includes cookies that ensures basic functionalities and security features of the website. These cookies do not store any personal information.
Non-necessary
Any cookies that may not be particularly necessary for the website to function and is used specifically to collect user personal data via analytics, ads, other embedded contents are termed as non-necessary cookies. It is mandatory to procure user consent prior to running these cookies on your website.
SAVE & ACCEPT
STAY UPDATED BY SIGNING UP FOR OUR NEWSLETTERSIGN UP
+